In 2016 I animated with a small team of talented people for almost a year on the animated feature The Little Vampire.
The movie is based on the characters from the novels created by Angela Sommer-Bodenburg.

A big part of the production was done in Amsterdam at Storm post production in collaboration with A.film production. I animated several minutes in total for the movie including the main characters and some vehicle scenes. Below a selection of shots that I animated. 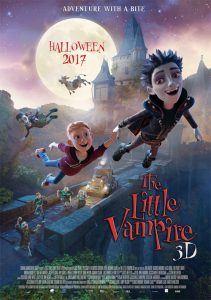